All about my new cat.

We got a cat!!! His name is Pot Roast and he's about three years old. I LOVE him!!! He's incredibly sweet and friendly and warmed up to us right away, we're following the shelter's guidelines for introducing him and my dog to eachother so he's in the bedroom for a couple weeks for now, keeping the dog (Pork Chop) out of the bedroom is a hassle so far but it's going good at least, no security breaches lol. We have their food bowls on either side of the door so they can get used to smelling each other cus that's what the shelter recommended, and I have a blanket on my couch for Pork Chop to lay on and I'll be bringing it in to the bedroom tonight for Pot Roast to lay on, something the shelter also recommended, luckily Pork Chop loves cats and Pot Roast used to live with a small dog, Pork is small, so I think things will go well once they can finally meet face to face, but yeah following the guidelines for introduction set by the shelter has really lowered my anxiety about the whole ordeal but I wish Pot Roast got to explore the whole house already, but it'll be worth it for the animals to get along without any fear being introduced! Also we got one of those deodorizing and scented cat litters and I never thought I'd say this about fucking cat litter but it smells really good lmao. We're going to the store today to get him one of those engraved collar tags to put his name and our info on it in case G-d forbid he ever gets out of the house, hopefully never happens but he's really chill so I don't think he'd try to bolt outside but we're just gonna have to be really careful from now on when it comes to opening and closing the front and back doors. Pot Roast slept in the bed with us last night which was cool cus he spent a good amount of time yesterday hiding under the bed so I'm glad he's starting to feel more comfortable already, he's also been purring constantly and like rubbing up against our legs when he's walking by so I think he likes it here! Here's another picture of him: 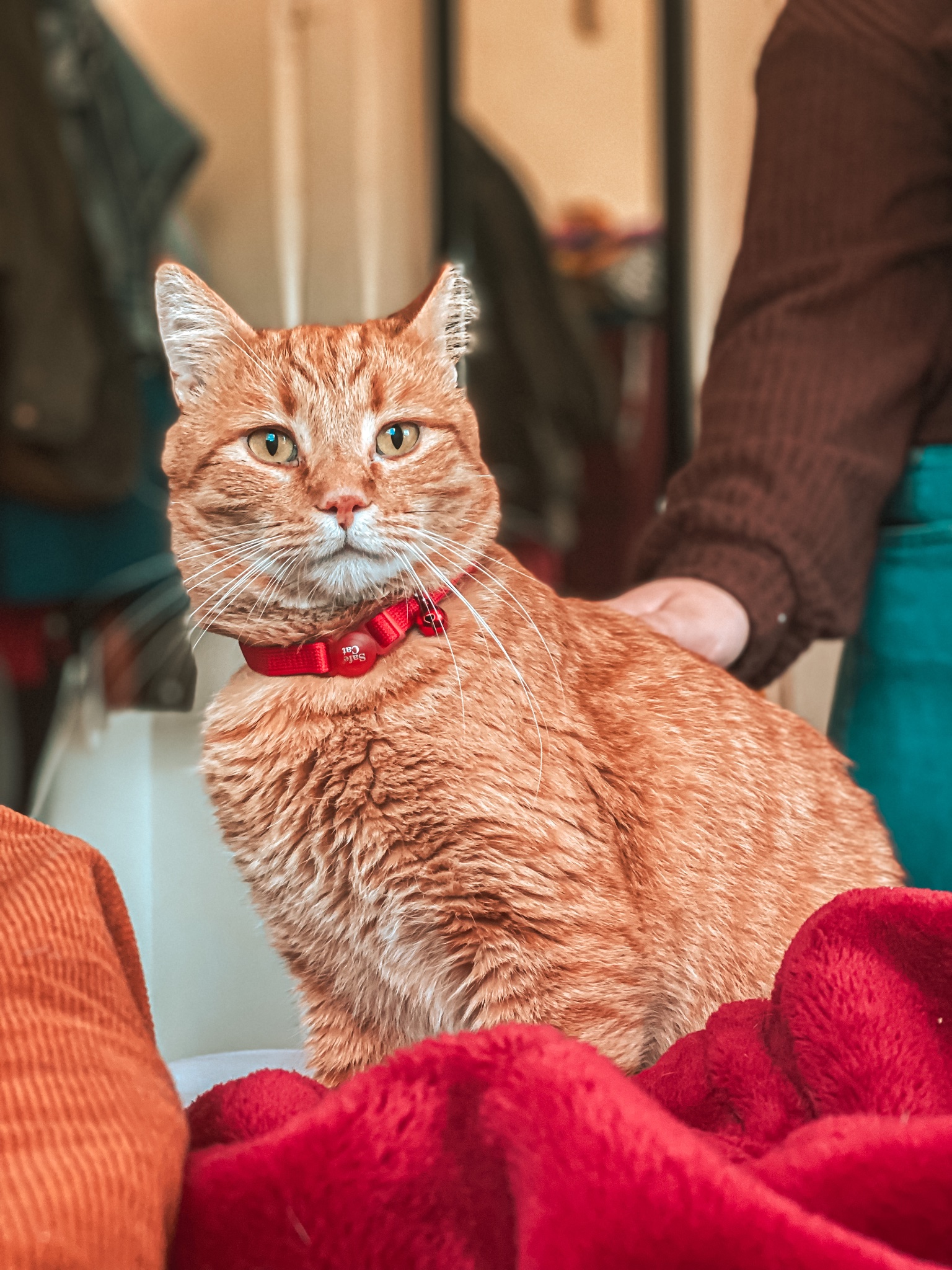 I've been having a really fun time working on my website and this blog, also I'm taking the blog off Big Cartel and just adding a link to it on my links page over there because mirroring it between the two sites is such a hassle and actually having hosting now where I can upload files makes working on the blog so much easier, and working on html and css stuff in general! It's really fulfilling carving out my own little space on the internet like this, one that's really mine, I think I mentioned previously I'm going to be taking udemy courses on html and css, and I think since my host allows it I'll try my hand at JavaScript cus I guess you can do pretty cool stuff with JavaScript from what I've been hearing anyway, the reason I started learning this stuff in the first place and I can't think the staff enough for this but this new social media website Cohost allows HTML and CSS to be put into posts you make, and it's been really fun working within the limitations provided to create fun looking posts, and yeah that's what led to me learning this stuff and I'm thrilled! I can't wait to see what this website will look like in the years to come as I learn more and more, I'm also gonna begin archiving each major version of the site beginning now so that if anyone ever wants to see what it used to look like I can send them the files, I could maybe even add it as like sort of a hidden feature of the site where you can see how it used to look in its early days if you have the right link lol, but yeah it's been a blast learning this stuff and I'm having the time of my life!

Hanukkah is swiftly approaching and I'm looking forward to making latkes and other fried foods! Also it's fun cus we usually have a few closes friends over to play dreidel and drink wine and what not, my fiancee is considering more and more the idea of converting, I'm obviously not pushing them either way, but it'll be fun to help them with that if they decide to convert, I also imagine I'll be going to shul a lot more if they do, lol. I actually still haven't found a shul to go to here in Tucson, I stopped going to mine in Tempe because of you know the pandemic, but luckily they started doing some online stuff, but now I'm in Tucson and need to find a new one, luckily there's quite a few Jewish facebook groups in the area so I'll probably start more seriously looking there, though it's still a bit nerve racking to go somewhere with so many people during the pandemic so I might hold off, I'm still undecided.

I'm still job hunting but I found out my clinic offers vocational help so I'm going to be calling them soon to figure that all out, probably a better lead than applying to anything under the sun, I've had a few interviews now and none of them have panned out unfortunately, getting a bit demotivated but I really want money lol.

Also recently I finally beat Dragon Quest 1 for the first time! I'm really happy about that it was very rewarding to have done so. I played the Super Famicom remake, I think it's possibly my favorite version of the original Dragon Quest games, if you don't know it has Dragon Quest 1 and 2 on one cartridge, I'm on to Dragon Quest 2 now which is notably much much more difficult of a game, but I'm having a really good time with it anyway, probably gonna play some later today, I'm gonna make my next blog post about Dragon Quest and what it means to me so be looking for that! It's a really great series if you haven't played it, the newest one Dragon Quest XI S: Echoes of an Elusive Age - Definitive Edition is on Switch, PC, and PS4/PS5, it's by far the best Dragon Quest title I've played and I highly recommend it! I've only played it in the 2D graphics mode, you can play it either 3D or 2D in the definitive edition, I definitely want to replay it soon in the 3D mode on my PS4, I also have it for switch though lol. I might speed run the game eventually which means I'll be getting the PC Version too since I guess that one is better for speed running. Anyway, play Dragon Quest! ドラクエはすごい！

Anyway, thanks for reading and I hope you have a good day!