I've been crossing so many stitches!

I started learning how to cross stitch on October 17th of this year and just finished my first big project! It’s King Dragon from Dragon Quest 1 but I made him red (of course). It’s not perfectly accurate to the actual pixel art because of the simple fact I was working on it for like 12 hours straight at a time for nearly three weeks and was losing my fucking mind lol, so I messed up in a few spots, it also did not help I was using this water soluble canvas that was warping like crazy because it would get soft from my sweaty ass hands and then harden up again when I wasn’t working on it in weird shapes and stuff so it made it hard to make stitches and count properly, I’ve since started working on some smaller projects with regular waste canvas which is water soluble but still uses actual threads that you just pull out after soaking it in water instead of the entire canvas being water soluble itself, it works A LOT better than the water soluble stuff so I am liking it quite a lot, I did a little ghost looking Dragon Quest slime on one of my t-shirts with it! 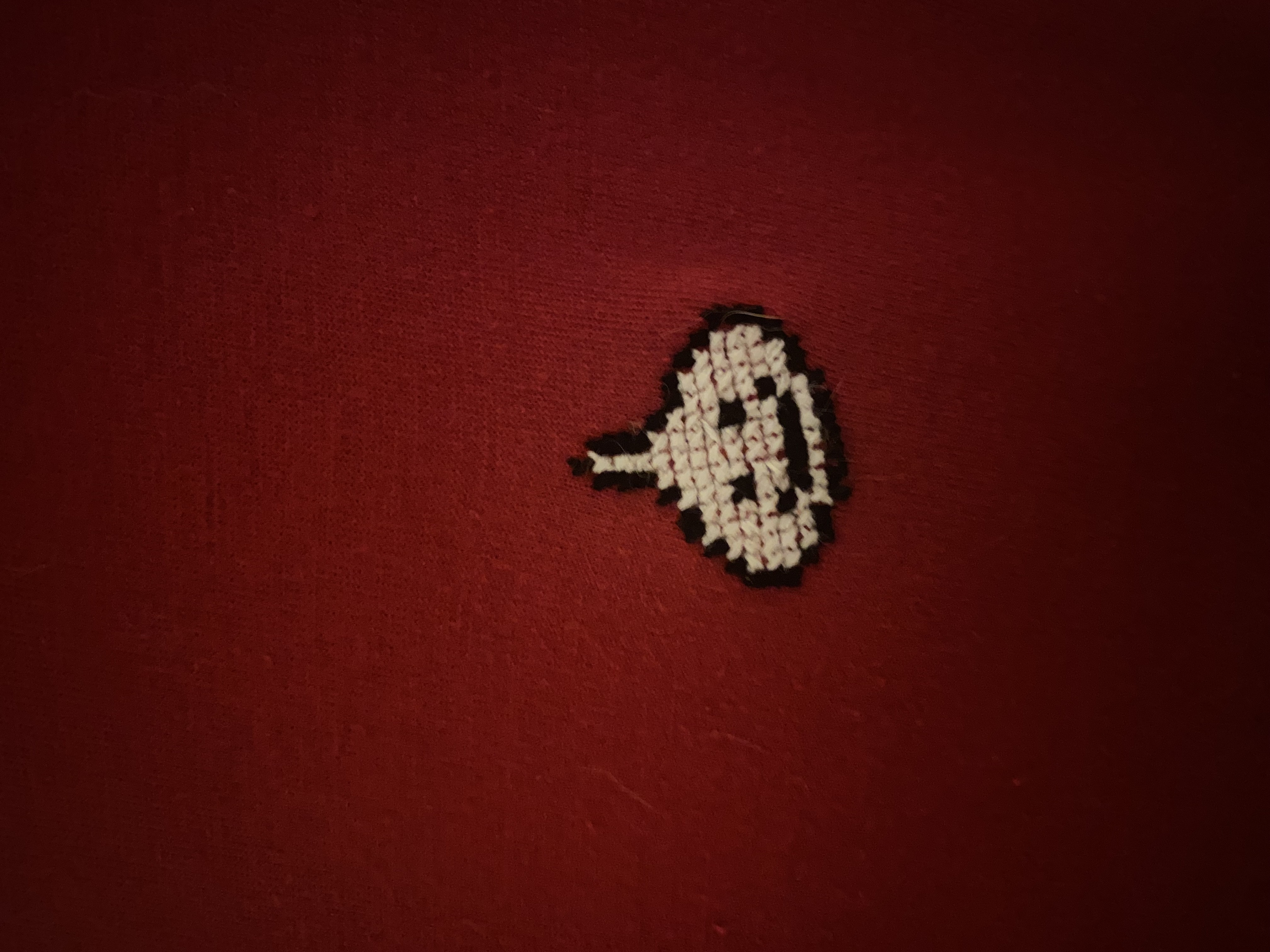 I’m going to be doing some more projects soon but much smaller than the King Dragon one, it took so long, I was so exhausted from it, but it was very fulfilling to finally complete it and now I have a cool shirt! The shirt actually has a bunch of designs on it and I plan to add more but I’ve been wanting to decorate more of my other clothes lately since I did such a huge thing on that one and it's already pretty packed with cross stitching lol, I’m planning on doing some of my pants and jeans next! I highly recommend cross stitching, it’s very fun and affordable! You can get a lot of embroidery floss for like 60 cents each at a fabric or crafts store and the waste canvas I use is also very cheap, and needles, also cheap! 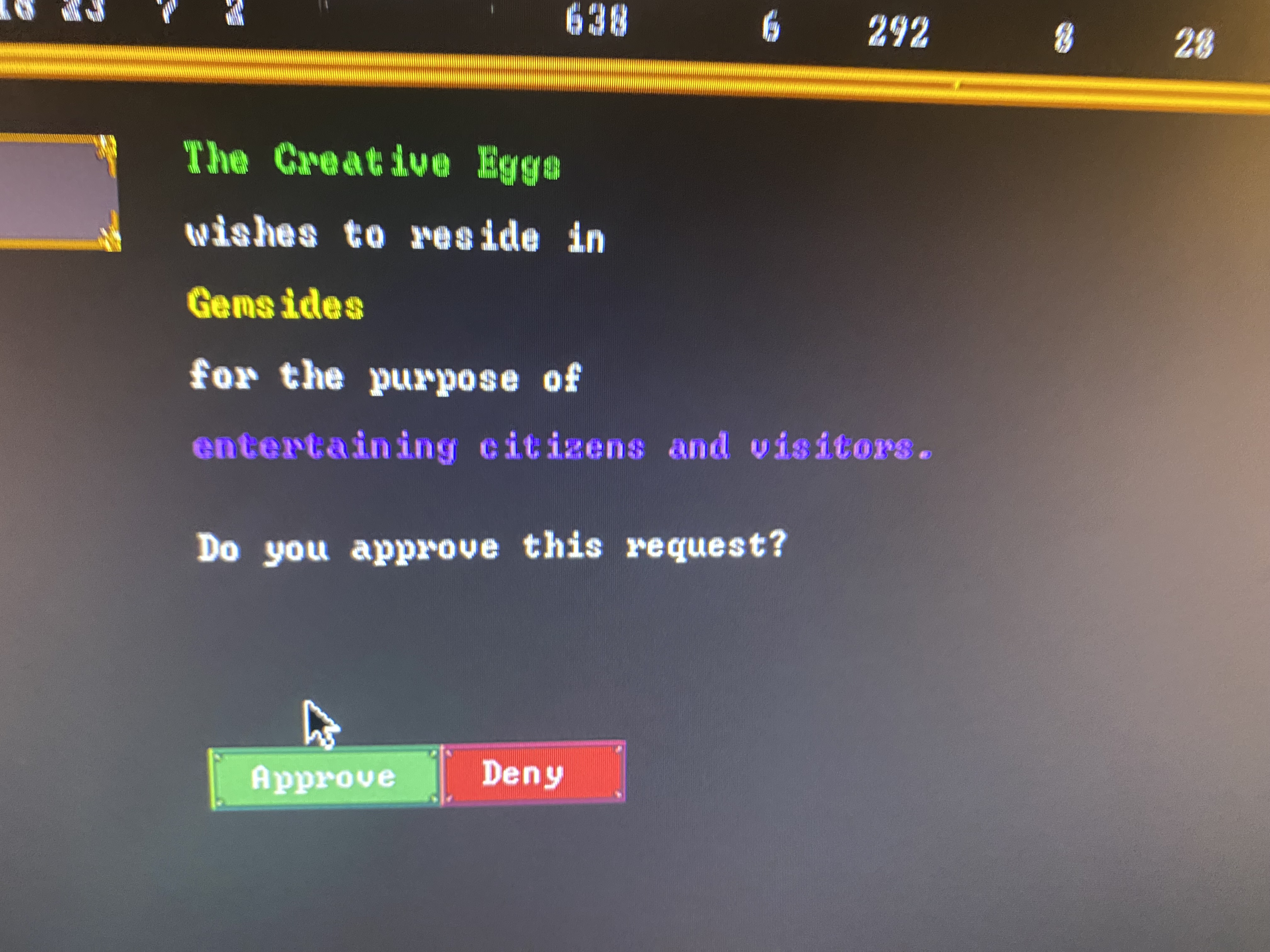 I’ve also been playing a fuck ton of Dwarf Fortress, it’s very easy to be playing it and completely lose track of time, I’m not very good at it yet but it’s also very complex of a game and very hard lol, my third fortress which is my current one is about 10 years old now (in-game time) and my Duke just died with no heir so we’re back to just having a mayor now, each spring (sometimes autumn?) a bunch of goblins come and wreck everything and kill like a third of the population and I haven’t had much luck trying to figure out what to do about it, last time they only killed one person but this time they brought a shit ton more people with them and just wrecked shop lol, I’m honestly just hoping this fortress fails on it’s own before too long because I want to check out the world in Legends mode which will give me a lot more to write about over here regarding Dwarf Fortress! You can choose to retire a fortress manually but I just kind of want to see what happens if they fizzle out lol, things are not going well after all! The population of the fort used to be like 120, now it’s diminished to 54 currently.

I highly recommend this game! 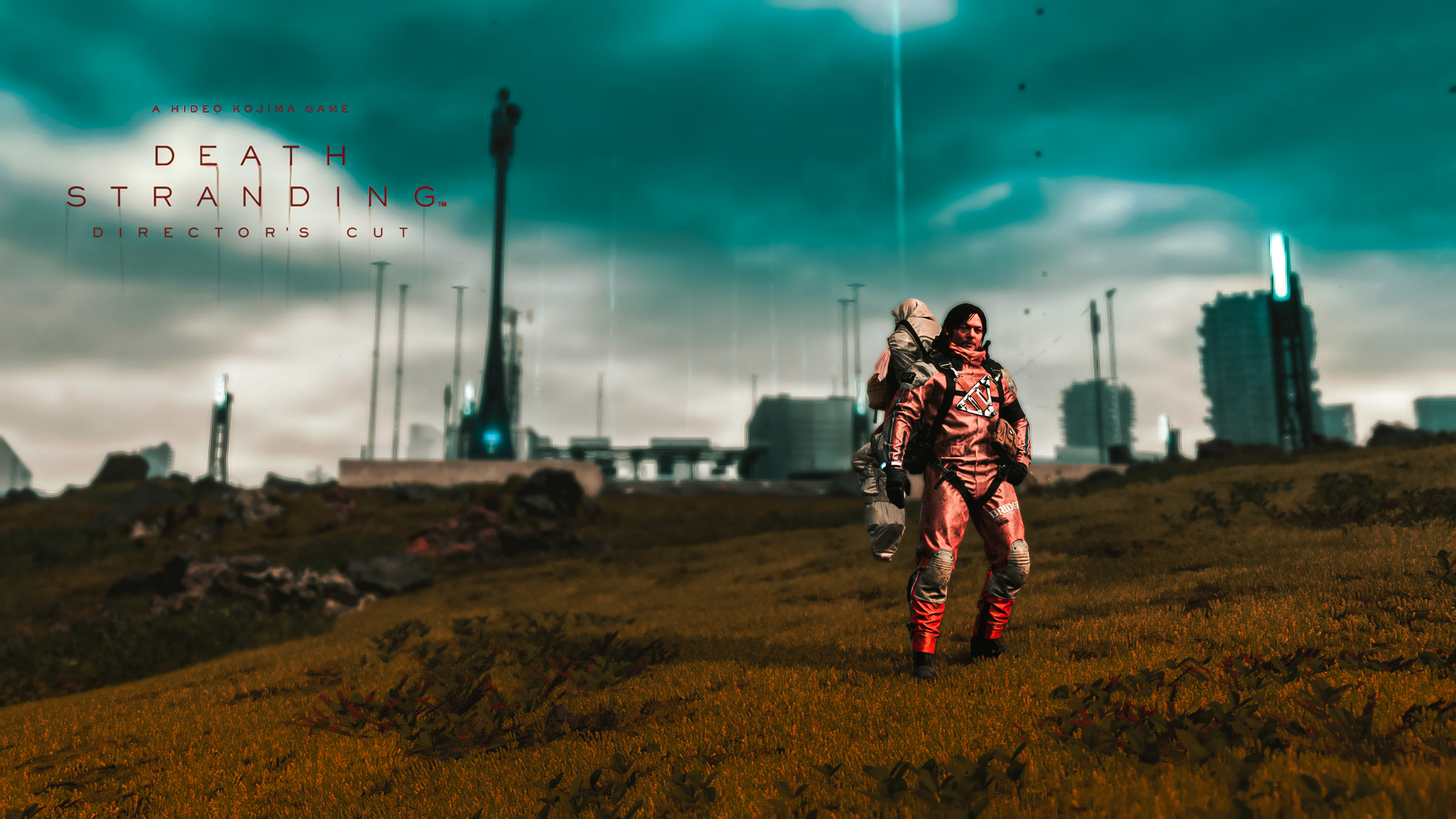 I’ve also been playing a lot of Death Stranding Director’s Cut! It was on sale as an upgrade from the base game on steam ($6 wow!) which I didn’t get super far into because I got distracted by other things plus Death Stranding is scary so I can only play so much at a time lol. Death Stranding is so cool though, it’s the first game I’ve played that’s been Directed? Designed? By Hideo Kojima and I love it, it’s such a funny game while also being terrifying as well as chill, the music beats that happen during story stuff like when you’re walking to the first city you encounter are awesome and very relaxing, the game is really just a roller coaster of feelings to experience, I’m looking forward to getting back to where I was in the base game to experience more of the story, which is mostly why I’m playing it, I saw someone recently write about how the story isn’t its strongest part but I really love it honestly. I’m also going to be playing Metal Gear Solid for game boy soon so looking forward to checking out an older Kojima game! But yeah highly recommend Death Stranding especially if you’re into horror! 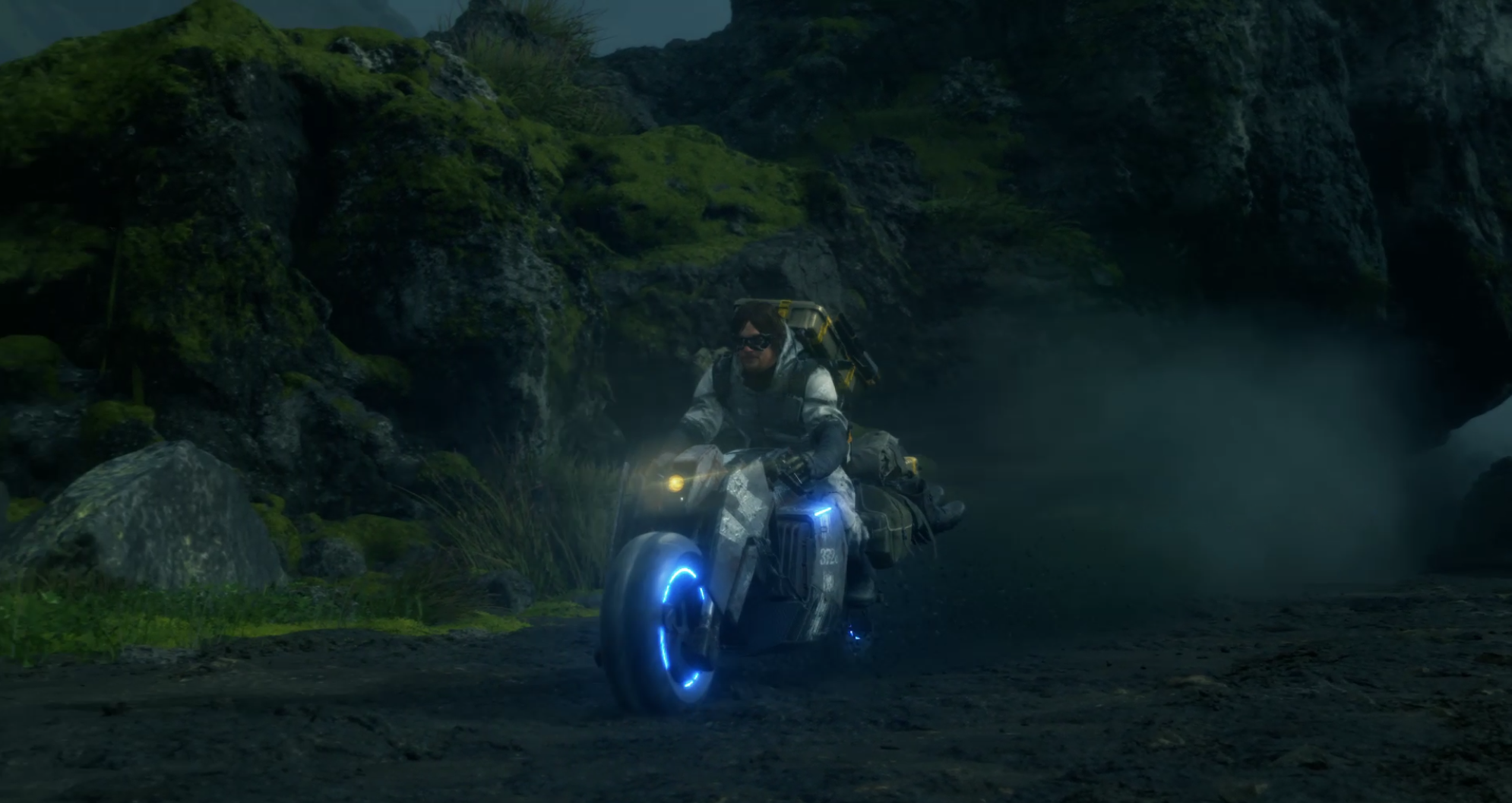 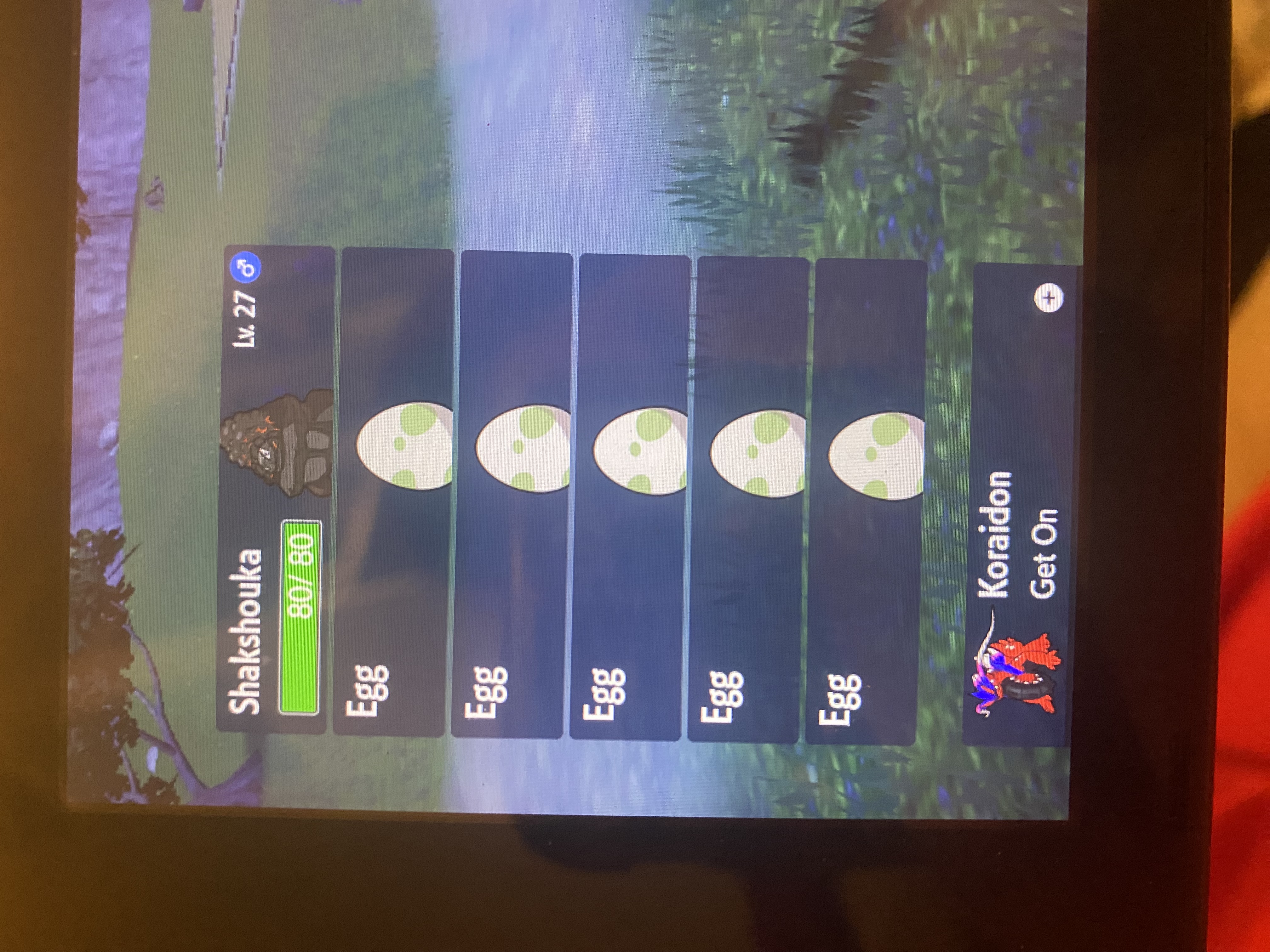 I’ve also been playing a shit ton of Pokémon Scarlet! It’s very fun, I have Scarlet and Violet so my sister has been playing my copy of Violet on her switch, this entry is very fun and I love all the new monster designs, especially the spoilery ones I won’t mention here in case you want to play it and be surprised! The new auto battling mechanic in the open world is also a very nice and very welcomed feature. I don’t have much else to say about the game that isn’t full of spoilers, but I’ll probably write more about it at some point! 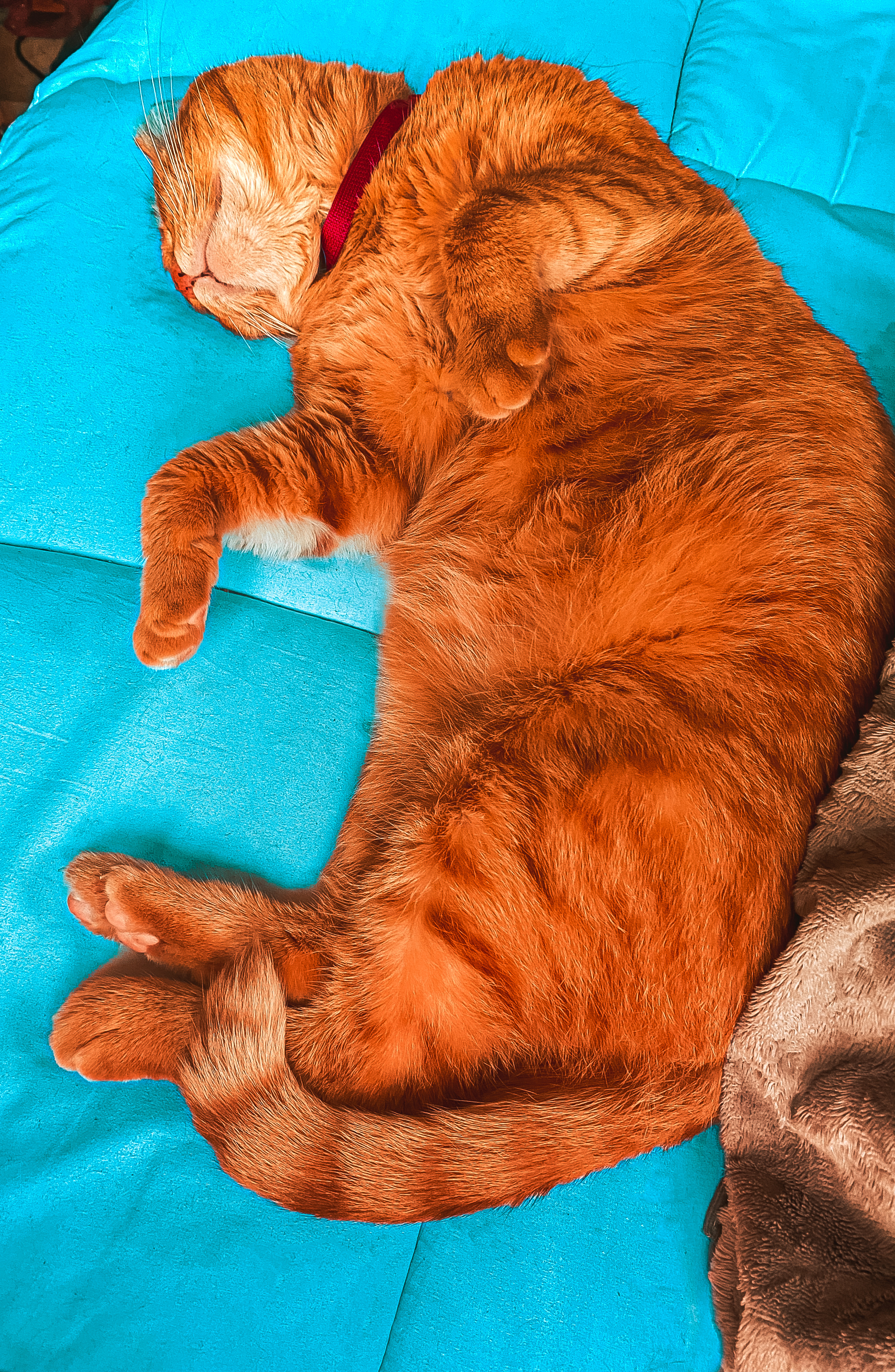 I’ve added an RSS feed for how many mice Pot Roast has killed, it’s currently at 13, and I’m not so sure it’ll go any higher because I haven’t heard any lately lol, he’s very skilled and patrols the house to find them and screams if he can’t find any. Also unfortunately Pot Roast has been diagnosed with FIV which is weird because the shelter is supposed to test them for that but we took him to his first vet visit and he tested positive for it, luckily we have insurance for him so regular vet visits won’t be a problem for us and he’s a strictly indoor cat because I’m very opposed to outdoor cats in general so he should be all good but it’s of course a bit worrying. 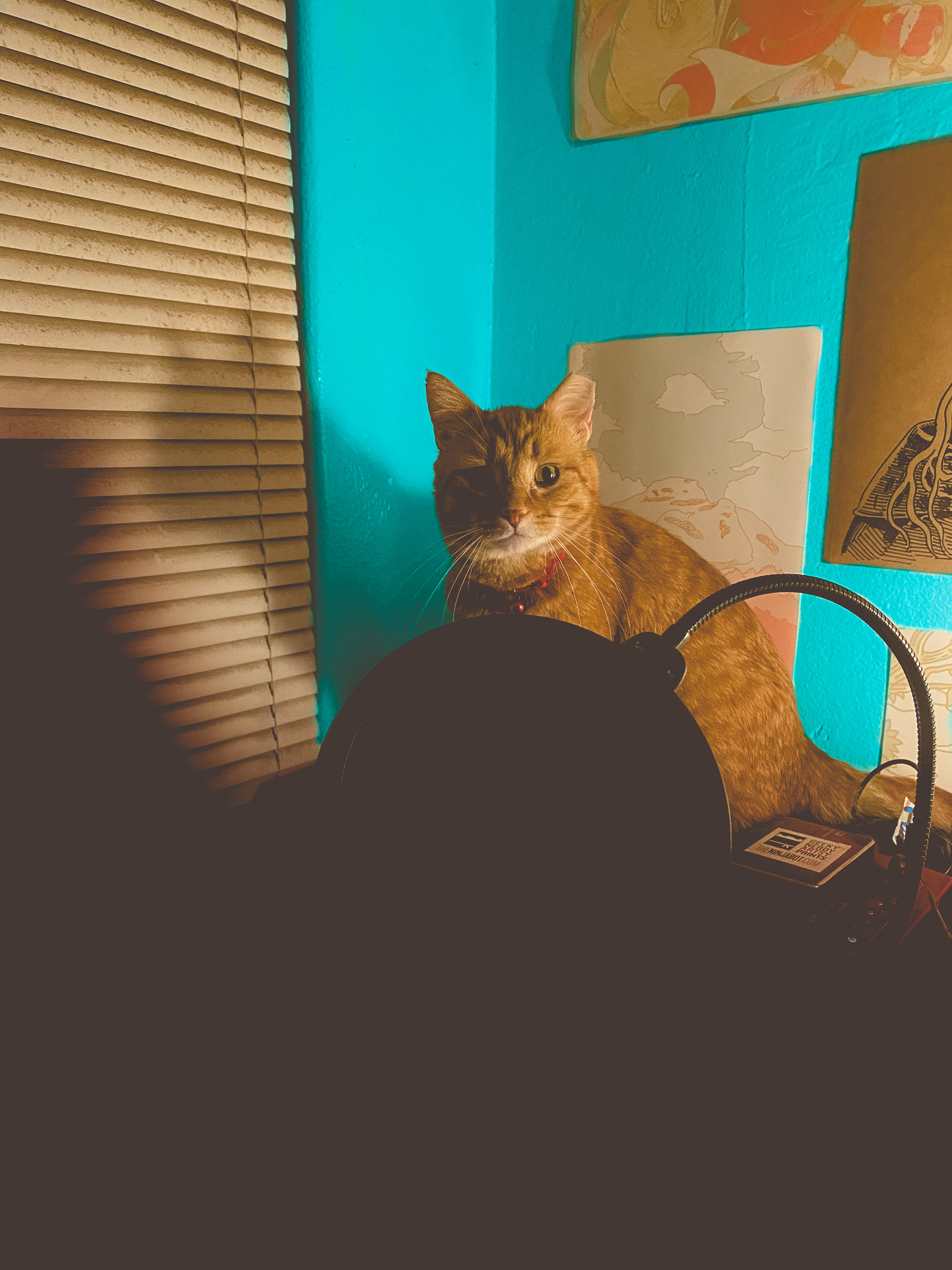 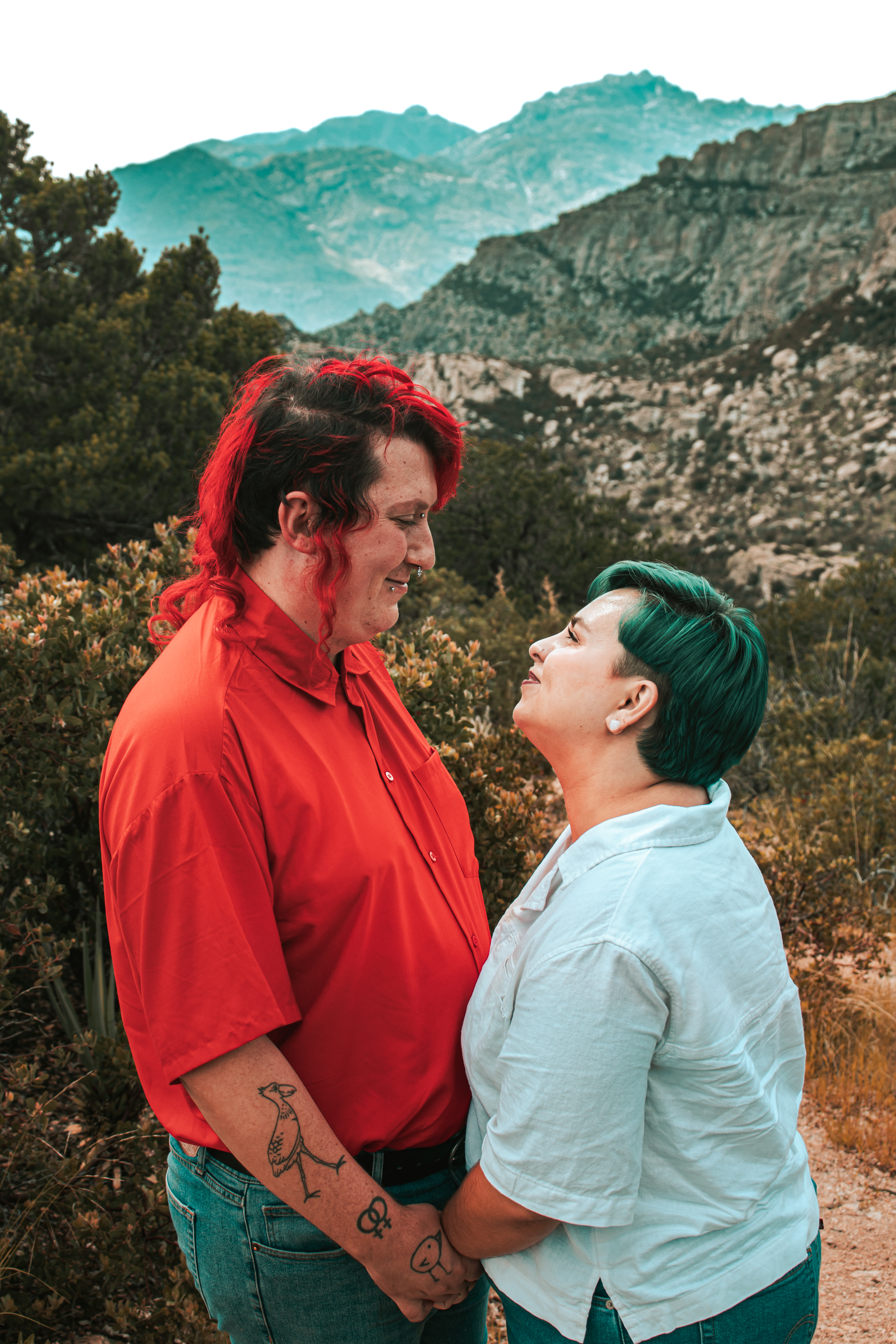 Indigo (my fiancée) and I have been working on the “Save the dates” for our wedding and are going to be sending those out soon, I think they turned out pretty good! 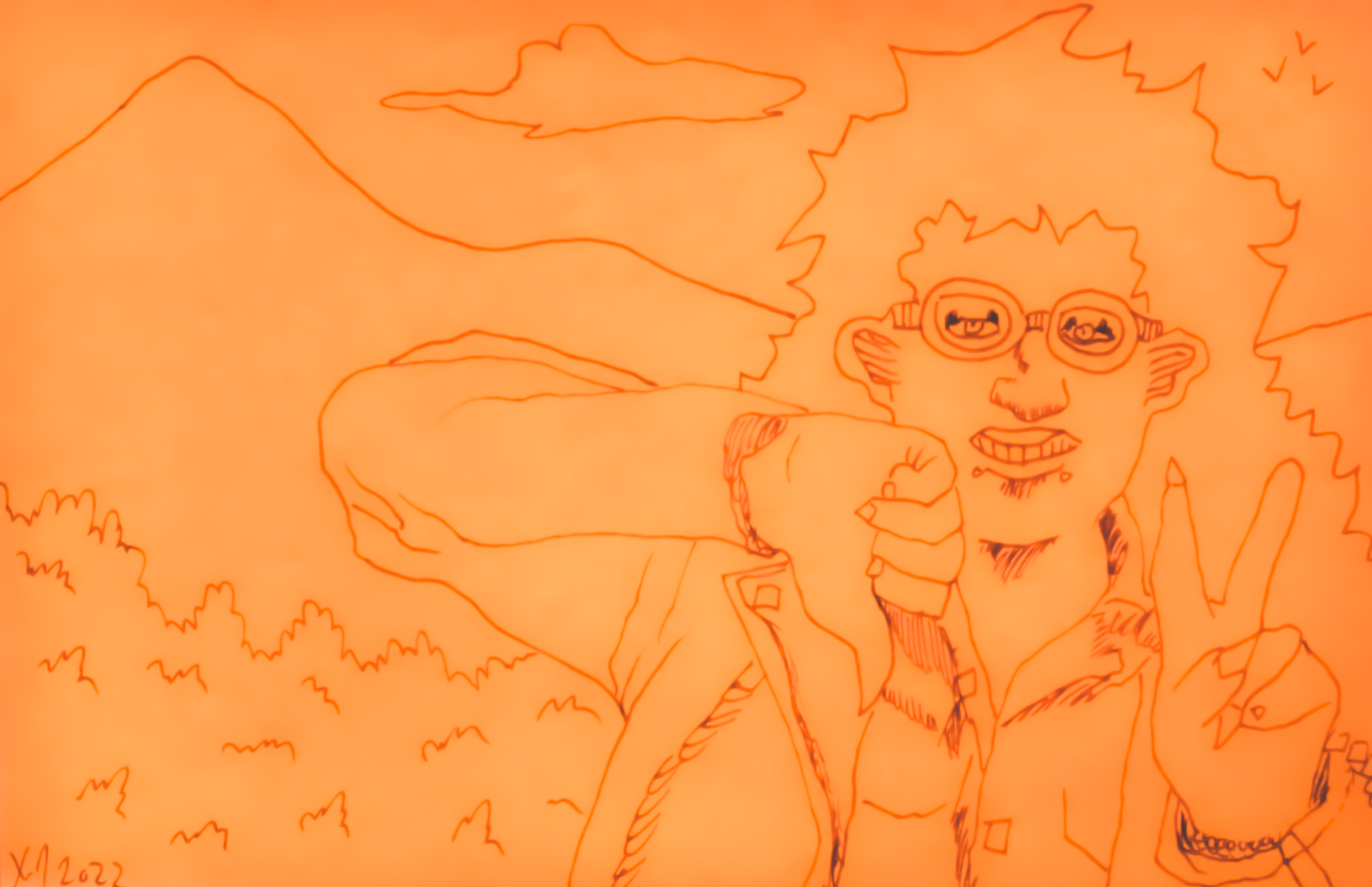 I’ve been tuning more and more out of social media which is strange to me I used to be posting on twitter constantly, I think this blog has helped quite a lot with that it’s somewhere I can talk about things in my life and thoughts I have in a longer form with less pressure, I’m not sure if anyone reads these even but it’s nice to put it out there any way! If you do read these feel free to email me if you want to comment or just chat! 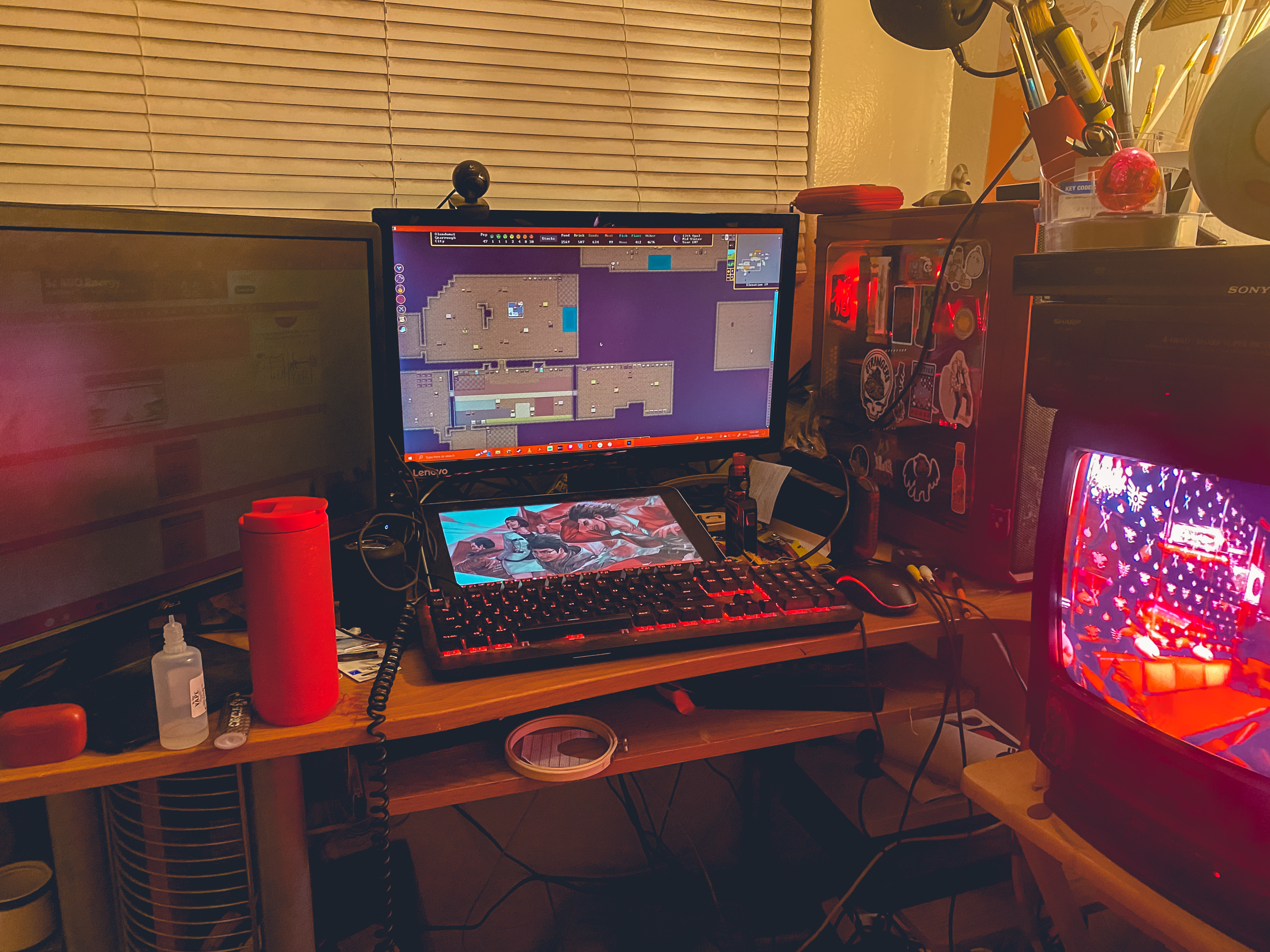 My sister gave me a computer monitor so now I can have a total of 5 monitors active if I really want to lol, very funny to me, two regular monitors, a drawing tablet, a CRT TV, and my iPhone or iPad Pro.

I’m going to be working on more video content/art soon so I’m looking forward to that, I want to do a let’s play and some video art as well but not entirely sure what game I want to play and what art I want to make.

I have to get back to fighting slimes, so thanks for reading I hope you have a wonderful day! 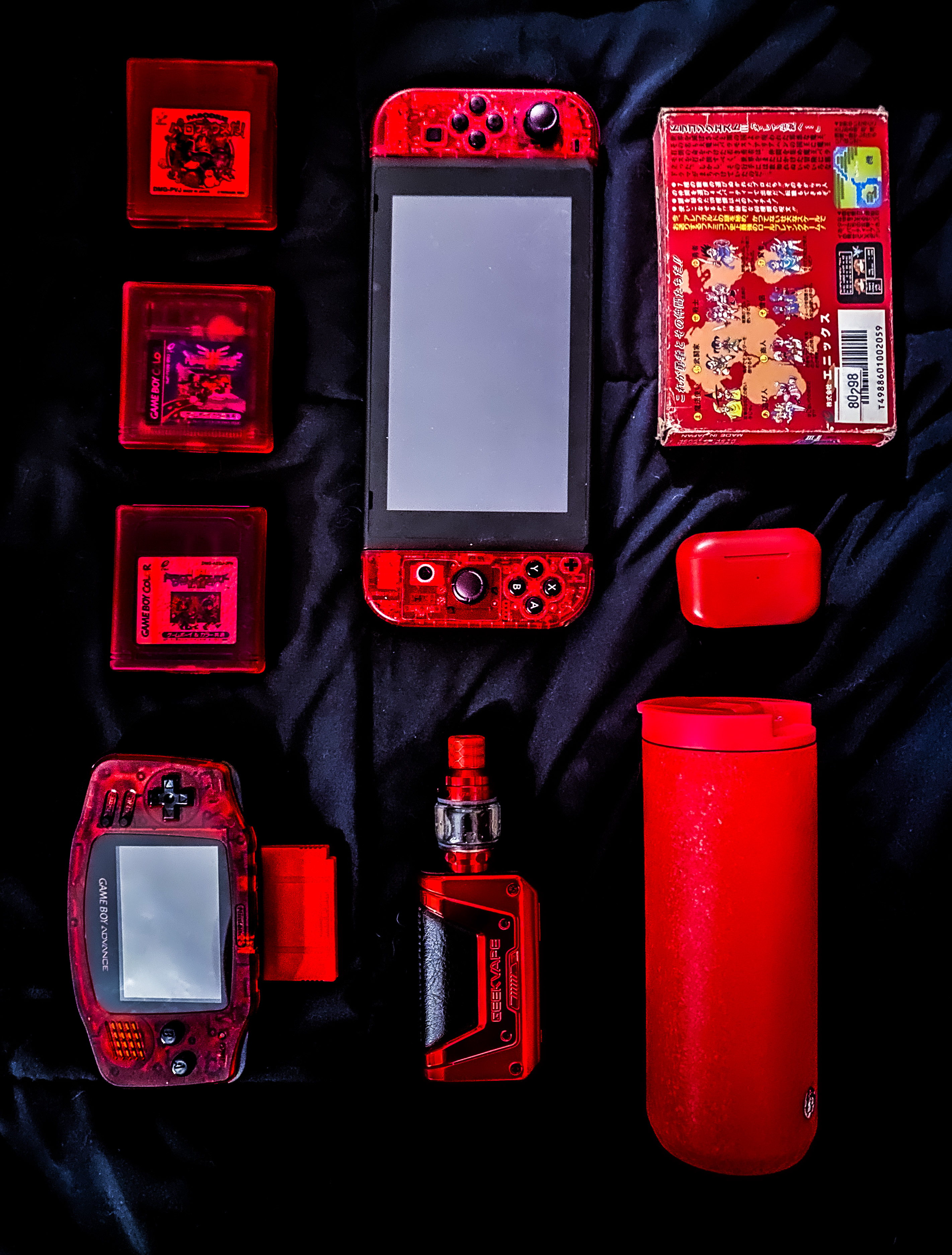